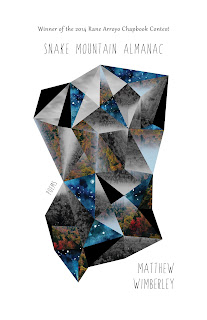 Purchase your copy through Paypal below or e-mail a query to sevenkitchenspress at gmail dot com.


Matthew Wimberley is a native of North Carolina’s Blue Ridge Mountains. A finalist for the 2012 Narrative 30 Below Contest, his writing has appeared or is forthcoming in The Greensboro Review, The Missouri Review, Narrative, Orion, The Paris-American, Poet Lore, Puerto del Sol, Rattle, and Verse Daily. Wimberley received his MFA from NYU where he worked with children at St. Mary’s Hospital as a Starworks Fellow.

My book, Survivable World, is available for $12 postpaid. All funds will support the operation of Seven Kitchens Press. Purchase your copy here!

To order chapbooks, simply click on the Paypal button at the bottom of each author's book page, or send a query to sevenkitchenspress@gmail.com [note new email address]. Please make check or money order payable to Ron Mohring and send to Seven Kitchens Press, 811 Commons Drive, Milford OH 45150. Each chapbook is made by hand; it may take some time to fill your order if stock is currently out. If you'd like to inquire about the status of your order, please use the above e-mail address.